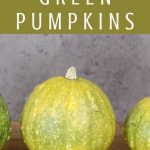 It happens to every gardener, the weather doesn’t exactly cooperate and we’re left with immature pumpkins on the vine. Thankfully, there are other ways to ripen green pumpkins.

A little time, space and sunlight is all you need to turn that weather mishap into good eating fortune.

Pumpkins are botanically speaking a fruit. Yes, we often use them as vegetables but like tomatoes they are fruit. Which means they will continue to ripen after being picked.

Harvest unripe pumpkins in the same way as ripe pumpkins, meaning cut them from the vine leaving at least an inch of stem on the fruit. Be gentle with the squash in that their skin hasn’t cured and is likely tender unlike those that have fully ripened on the vine.

Be sure to wash off any dirt with a damp cloth. Just ripe down the skins of the pumpkins. There is no need to get them soaked or wash them intensely – the extra water would likely encourage rot. A damp cloth just to remove any dirt and/or bugs.

Choosing a Spot to Ripen

The pumpkins will need air and sunlight to ripen.

They could theoretically be kept outside for this, however; if you are expecting more frosts or a freeze this isn’t ideal. If the weather is warm enough do keep them on a porch or on the grass for direct sunlight.

Join our newsletter and get the instructions to make our handy yard stick planter today! No more thinning out seedlings and wasting seeds, time, and energy!

If the weather is too cold, ripening indoors is absolutely doable. Sunny windowsills work just perfectly. South facing windows even better, but use whatever space you have available. The more sunlight the pumpkins get the faster they will ripen.

Place the green pumpkins in the sunny window leaving some space between each so that they aren’t touching and air can flow freely between the squashes.

Rotating the pumpkins now and then towards the sun will help them ripen more evenly.

Let them sit until they ripen and cure (meaning that the skin becomes hard). How long it takes for them to ripen will depend on the amount of light, how far along they were when harvested, and other factors that can’t be nailed down.

Simply be patient and give them the time they need.

Once the pumpkins have ripened and cured, store them somewhere cool and dark where they will likely last many months. Do keep an eye on them and use up any soft pumpkins before they rot.

If the pumpkins don’t cure well or do start to get soft, there are ways to preserve it so that they can still be eaten throughout the winter months.

Roast those pumpkins and make homemade pumpkin puree which can easily be frozen for use later.

While pumpkin puree cannot be safely canned at home, chunks of all winter squashes can be pressured canned for easy meal planning.

From here, you can eat the pumpkins in the same way as any that were ripened on the vine. Remember that in most cases any winter squash can be swapped for another in recipes, so don’t be shy in using what you have on hand.

Try them in savory recipes like an Autumn Harvest Salad. And, of course, pumpkin cookies are great treat for lunchboxes, care packages, and weeknight dessert.