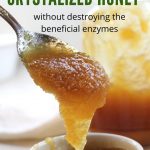 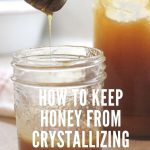 There is nothing wrong with honey that has crystallized; in fact, it’s a sign that you have raw honey. However, sometimes you prefer a liquid honey rather than a solid honey. That’s when knowing how to decrystallize honey and still keep it raw comes in handy.

Why Does Honey Crystallize?

Honey is a super saturation sugar solution. It’s about 70% sugar and less than 20% water which means it has way more sugar molecules than the water molecules can hold. When the sugar crystallized it separates from the water and the crystals start stacking on top of each other. Eventually the crystals will spread throughout the honey and the entire jar of honey will be thick or crystallized.

Raw, unfiltered and unheated, honey has more particles such as pollen and pieces of wax in it than honey that has been heated and filtered through super fine filters. These particles act as building blocks for the sugar crystals and will cause the honey crystallize sooner.

Most store bought honey will have been heated to 145F for 30 minutes or 160F or just a minute and then quickly cooled. The heating kills any yeast that can cause fermentation and insures that the honey won’t crystallize on the shelves. However, it also destroys most of the beneficial enzymes.

Lastly, honey will crystallize faster when it’s stored between 50-59F. This means that it’s not a good idea to store honey in the refrigerator. Honey is best stored at temperatures above 77F to avoid crystallization. The crystals will dissolve at between 95 -104F, however, anything about 104F will destroy the beneficial enzymes.

How to Prevent Honey from Crystallizing

Given enough time, all raw honey will eventually start to crystallize. That being said, there are a few things you can do to prevent honey from crystallizing as quickly.

When you process honey, filter it through 80 micro filter or through a few layers of fine nylon to catch the smaller particles such as pollen and pieces of wax. Some of the pollen particles will still get through the mesh, so if you are using raw honey for allergies, some of the pollen will be in the honey.

Store the honey at room temperature; ideally between 70-80 F. Honey is a natural preservative and does not ever need to be refrigerated. Putting honey in the refrigerator will speed up the crystallization process.

Honey stored in glass jars will crystallize slower than honey stored in plastic jars. Also, if you infuse honey with herbs, expect that it will crystallize sooner if the herbs are leafy (such as rose or sage) than roots (such as ginger or garlic). In fact, fermented garlic and honey actually gets more fluid the longer it infuses. The larger root pieces are easier to pick out and ensure you have it all.

Honey crystals will dissolve when heated. However, heating the honey above 104F will destroy some of the beneficial enzymes. So the trick to decrystallizing honey and not destroying it’s beneficial enzymes is to heat the honey slowly and steadily until it’s liquid again.

If you have a gas oven with a pilot light, you can keep a jar of honey on the stove and the warmth from the pilot light will be enough to dissolve the crystals.

If if the honey is in a glass jar, you can use a double boiler to make the crystallized honey liquid again. Put the jar of honey in a pot of water making sure that the water is high enough to come to the height of the honey in the jar. If the jar is pretty full of honey, you should put a lid on the jar to make sure no water gets into the jar. Just know that you’ll need to remove the lid to stir the honey occasionally.

Heat the water to about 95F, which should be cool enough to touch the water but hot enough that you wouldn’t want to keep your finger in the water.

If the honey is in a plastic bottle, you can use the method above, just be sure that the water never gets over 100F or you’ll run the risk of melting the plastic.

This is a little unconventional but it works and is completely hands-off. If it’s warm weather you can just put the honey in the car and let the heat inside the car to melt the honey crystals. This would be a good option if the honey is in a plastic bottle, especially one of those honey bear bottles.

I wouldn’t leave it in the car all day or if the temperatures are over 100F because you run the risk of killing the beneficial enzymes.

Can honey be decrystallized in the microwave? Yes, it can.

Should honey be decrystallized in the microwave? That’s a whole different question. And the answer is “It depends.”

Because microwaves heat unevenly and quickly, you’ll need to microwave it for just a few seconds at a time and stir it in between times. Even with doing this, you have more risk of destroying the beneficial enzymes than you do with the double boiler method.

But for other things, like drizzling on biscuits, I use the double boiler method.

How many times can you decrystallize honey?

There is always the possibility that the honey will crystallize again. You can decrystallize it again, however the more you heat it the more you will degrade the honey. So I wouldn’t do it more than once or twice.

I think it’s wise to just decrystallize honey in small amounts as you need it, instead of trying to melt an entire jar of crystallized honey at once.

How to use crystallized honey

Crystallized honey can often be used in it’s solid state. It has a nice crispy texture and if it’s not super solid it can still be spread on bread or cornbread.

If you want to make creamed honey (whipped honey) at home, you will need crystallized honey to start with.

Since the ingredients of lip balm have to be heated, it’s no problem to use crystallized honey to make honey lip balm.