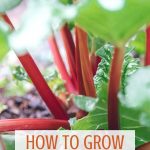 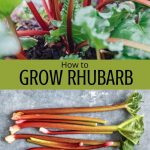 Growing rhubarb can be one of the easiest things you ever do. Growing in a wide range of garden zones, this low maintenance plant can give you many, many years of harvests.

Rhubarb does well in garden zones 3 to 8. It is even considered an early (and prolific) harvester in Alaska! It does prefer winters that drop below 40 degrees F, making this typical perennial an annual in warmer climates.

The easiest way to add rhubarb to your garden is by dividing a mature plant. As rhubarb gets older, diving the plants will help ensure stalks stay thick. Divide the crown at the beginning of spring, just as new growth is starting to form. Use a clean, sharp shovel to divide the plant, typically in half or thirds for larger established plants. Just ensure each section has at least two stems. This can also be done in late fall, after the plant has gone dormant, but spring is the best.

Rhubarb prefers lots of sun, unless you are growing it as an annual in warmer climates. However, it can do well in partial shade too. Be sure the ground is not soggy. New plants need to be watered well, but too wet will cause the crown to rot. Rhubarb will take a lot of nutrients from the soil, so be sure to add compost to the area as well.

These plants will easily grow up to 4 feet wide and tall, so chose your area accordingly. Typically a rhubarb plant can be harvested for 20 years, although I know a farmer in Alaska who is still harvesting the same plants his father planted over 50 years ago. Other than harvesting it, he completely ignores it. Now how’s that for an easy food to grow?!

If you don’t have any plants to divide, most nurseries will sell rhubarb plants for easy transplanting. These can be planted as soon as the soil is workable in the spring.

It is possible to plant rhubarb from seed, but you will typically need to wait until at least their third year of growing before you harvest. Divided plants can be harvested on their second year. Allow those roots to become well established.

As said above, rhubarb can be incredibly easy to care for. A friend of mine uses rhubarb as summer long greenery all around her yard, due to it’s easy maintenance.

Due to rhubarbs size and leaves, it does fairly well at keeping the weeds at bay. Although you should help it along with this task for the first year or two after planting. Organic mulch is a good option for rhubarb plants. Just remember you do not want the soil around it to be soggy or it will rot. Warmer climates may need to water their plants on a regular basis, but areas like the Pacific Northwest typically have enough rain to take care of it.

There are few pests that will mess with rhubarb, partly due to the leaves being poisonous. (This also makes them fairly deer and moose resistant!) Rhubarb curculio is a beetle that you will need to keep an eye out for. Either remove them by hand or try sprinkling diatomaceous earth around the plants. Any mites that occur should be treated with neem oil.

If you wish to get several harvests from your rhubarb plant, be sure to remove the tall flowering stalks. These often reach up to 5 feet tall and produce white/ pink flowers, almost like cauliflower in shape. Simply pull the stalk away from the crown at the base to keep your plant producing edible stalks. You can, of course, leave the flowering stalks to add some prettiness to your garden as well once you have enough rhubarb harvested.

Harvesting rhubarb is extremely easy. Once the stalks are at least 10″ long, grasp at the base and pull sideways. This will remove the entire stalk from the crown. Some gardeners prefer to use a knife to harvest, but this is not necessary and will not add to the life of the plant. Break off the leaf and discard. The farmer in Alaska uses his to act as mulch around the rhubarb crown. These can also be added to your compost pile. Just remember that the leaves are poisonous and should not be fed to people or animals.

But what if I have green rhubarb? When is my rhubarb ripe?

Some rhubarb varieties produce more green stalks than others. This doesn’t mean it isn’t ripe though. As long as the stalks are at least 10″ long and 3/4″ wide, you can eat them. Leave at least two stalks on the plant when you harvest to ensure the plant still has plenty of reserves. When you are done harvesting for the season, usually around mid to the end of June, let the remaining leaves stay to build up energy for the winter.

Use a clean knife to cut the leaf off the rhubarb and the base of the stalk that widens out at the crown. You can either snack on the rhubarb right away (I grew up watching my dad walk around the yard with a stalk of rhubarb in his mouth) or it can be stored in the refrigerator for up to two weeks.

Victoria Rhubarb and other Varieties

The different varieties of rhubarb have different intensities of red and fibrous stalks, as well as sizes.

“Crimson Red” rhubarb stalks grow up to 36″ long and are typically not stringy.

“Victoria Rhubarb” is an open-pollinated heirloom variety. This would be your best choice if you are growing rhubarb from seed. It is not overly stringy. (We recommend MI Gardener for your seeds!)

“Canada Red” is often considered sweeter and is a smaller plant. The stalks are a bright ruby red.

“Crimson Cherry Rhubarb” has deep red stalks and is said to grow in garden zones 2 through 9.

“MacDonald Rhubarb” is resistant to crown rot and has a partial red/ green stalk.

“Valentine Rhubarb” has bright red stalks and typically has very few to no flower (seed) stalks.

Due to its tart flavor, rhubarb is typically used in sweet desserts, such as Rhubarb Crisp or Rhubarb Custard Pie. It is also easily preserved for later use. Slice and freeze rhubarb by simply placing it in a freezer bag. This is best when you plan on making rhubarb juice, as freezing gives you more juice. (Delicious rhubarb lemonade!) Canning it for other uses is a great way to preserve it as well. Give it a twist and make some Low Sugar Balsamic Strawberry Rhubarb Jam or Easy Rhubarb Relish!

When growing rhubarb, just know that there are many, many uses for it for many years to come!