Wondering where to get heirloom, organic, non-GMO seeds? At Rootsy, we’re sharing our favorite seed companies, their catalogs, and why we like them. 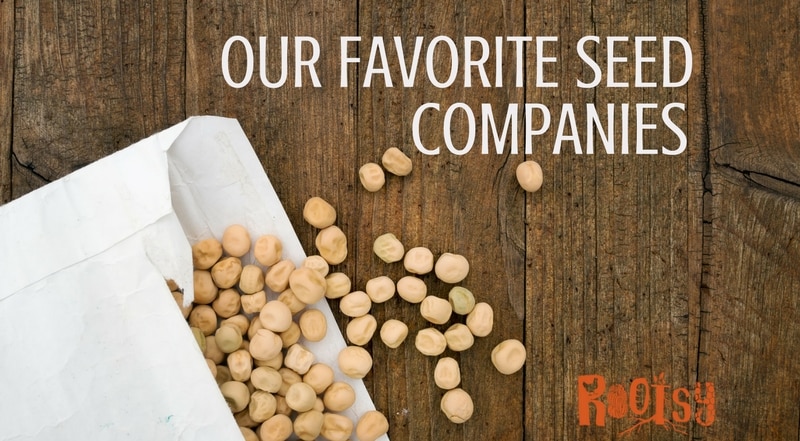 Like many gardeners, I have a seed issue….I’m somewhat addicted to seed catalogs, saving seeds, collecting seeds, reading about seeds, dreaming about seeds, and ultimately planting seeds. Over the years I’ve developed a quite the collection of seeds and seed catalogs. I’ve purchased seeds from a variety of companies and have narrowed down my list of favorite seed companies.

There are tons of good seed companies and I certainly am not familiar with all of them, however, there are two things that are most important to me when looking at where to spend my hard earned money on seeds.

The first thing I look for is sustainability. Does this seed company sell heirloom, organic seeds? I like to save seeds from many my plants as it cuts down on my gardening costs and allows me to select seeds from just the strongest plants.

Let’s get one thing straight, hybrid seeds are not the same as GMO seeds. I’ve noticed a lot of seed companies marketing their seeds as non-GMO, but the fact is it would be hard to find GMO seeds for a backyard garden. So while it is true that those seeds are non-GMO, it is probably also true that all the seeds on the seed rack are non-GMO. The bottom line is, don’t sweat it if your seed packet doesn’t have the non-GMO labe.

You can’t save the seeds from hybrids but they are not the same as GMO and they often have been bred to resist disease or have special traits, colors, or flavors.

Many companies have signed the safe seed pledge, and while it is voluntary I suspect that the vast majority of the signers do so with the intent of fulfilling the pledge. It reads…

“Agriculture and seeds provide the basis upon which our lives depend. We must protect this foundation as a safe and genetically stable source for future generations. For the benefit of all farmers, gardeners, and consumers who want an alternative, We pledge that we do not knowingly buy, sell or trade genetically engineered seeds or plants.

The mechanical transfer of genetic material outside of natural reproductive methods and between genera, families or kingdoms, poses great biological risks as well as economic, political, and cultural threats. We feel that genetically engineered varieties have been insufficiently tested prior to public release. More research and testing is necessary to further assess the potential risks of genetically engineered seeds. Further, we wish to support agricultural progress that leads to healthier soils, genetically diverse agricultural ecosystems and ultimately healthy people and communities.”

The next thing I look for is local. This one is a little harder to source out but whenever I can buy seeds or plants that have been grown locally, I do. I believe this makes for healthier plants as they’ve had time to acclimate to our climate. Of course, this isn’t always possible or practical.

About seed catalogs. While I love perusing paper seed catalogs while sipping tea, I also love the idea of not wasting paper. So, I only request catalogs from a company every few years. And I respect that many companies have done away with paper catalogs and only offer online catalogs.

MiGardener is the first place I look when I need to buy seeds. They only sell heirloom seeds and they sell them for 99 cents a packet….yep, a dollar a packet.

MiGardener is a small family owned seed company that has an exciting social responsibility program. With this program you can send in any extra seeds you have and they will give them to those who cannot afford seeds. I love them because I often save way too many seeds from my own plants and have a hard time finding takers locally. You can learn more about theis program on their site.

Baker Creek sells only heirloom seeds and has amazing print catalogs. They have a free one and a larger one you can purchase. The free catalog can also be downloaded to your computer, you can request a catalog here.

Baker Creek offers over 2,000 varieties of seeds from all over the world. They also have a program that donates seeds to school and community garden programs in the US and around the world, particularly those in impoverished areas.

Botanical Interests started as a mom and pop seed company in 1995 and now can be found in independently owned nurseries and on Amazon.  They only sell non-GMO seeds. One of the things I really like about them is the amount of information they put on their seed packets – much more than the average seed company.

They also have a donation program for school and community garden education. Their catalog is beautiful and full of information. You can request a one to be mailed to you or you can download one to reduce waste.

Seeds for Generations is a small, fairly new, family seed company. While they don’t have the selection that the bigger seed companies do, they have some really fun varieties of common vegetables, fruits, and herbs. They only sell organic, heirloom seeds and they don’t have a paper catalog.

Jason and Shannon Matyas, the owners, involve the whole family in the business. It’s fun to get a seed packet that has been “prepared for you by” a child who is getting to practice writing their name by signing the packet and who is learning to count by counting out seeds.

Johnny’s Seeds is another seed company that started small and now has become quite large. They sell organic and non-organic seeds, heirloom and hybrid seeds, but not GMO seeds. They have taken the safe seed pledge and also have a charitable program for schools and community gardens. You can order a paper catalog here.

Johnny’s Seeds also sells in large quantities and sells “enhanced” seeds.  Not all of their seeds have been enhanced and if they have been, it’s disclosed. The enhancement might be to protect the seed from disease or to facilitate sowing the seeds.

Seed Savers is a non-profit organization dedicated to saving seeds for future generations. They have a seed bank of over 25,000 varieties. You can order a catalog in which they offer about 600 varieties or you can download a digital catalog.

They also facilitate a seed exchange where you can exchange seeds with other seed savers.

Seeds of Change is an interesting company in that it started in 1989 as a small organic seed company but was bought the Mars, Inc. in 1997 (yep, the candy company). For the most part, Seeds of Change has continued to operate just as it did before Mars bought it. As organic and sustainable become more mainstream, large corporations are looking to get in on the action and buying companies such as Seeds of Change is how many of them are doing it.

On the positive side, with a large company backing them, Seeds of Change has been able to get distribution in big box stores such as Wal-Mart, Lowe’s, and Home Depot. For people who aren’t going to buy online and just want to buy their seeds while doing their other errands, this availability is a great option for them.

Seeds of Change also has a donation program, printed catalog and downloadable catalog.

High Mowing Seeds is another large company that sells organic, non-GMO seeds. Some locally owned nurseries will carry High Mowing Seeds which is great for those who don’t want to order online. High Mowing Seeds grows most of their 600 varieties of seeds on their 40-acre farm – which sets them apart from most large seed companies.

High Mowing Seeds also sells in large quantities which is great for the market gardener or if you’re planting cover crops. They offer a printed catalog or a digital catalog that’s full of helpful information. They also offer a fundraiser option for organizations to raise money.

One of the best ways to save money in the garden is to save your own seeds and swap with neighbors. Over time you’ll amass quite a collection of seeds that grow well in your climate.

Buying seeds instead of transplants is the second way to save money. But it’s not all about just saving money. When we spend our money, we should spend it to support causes we believe in. That’s how we make a difference for our family and our communities.

What are some of your favorite seed companies? 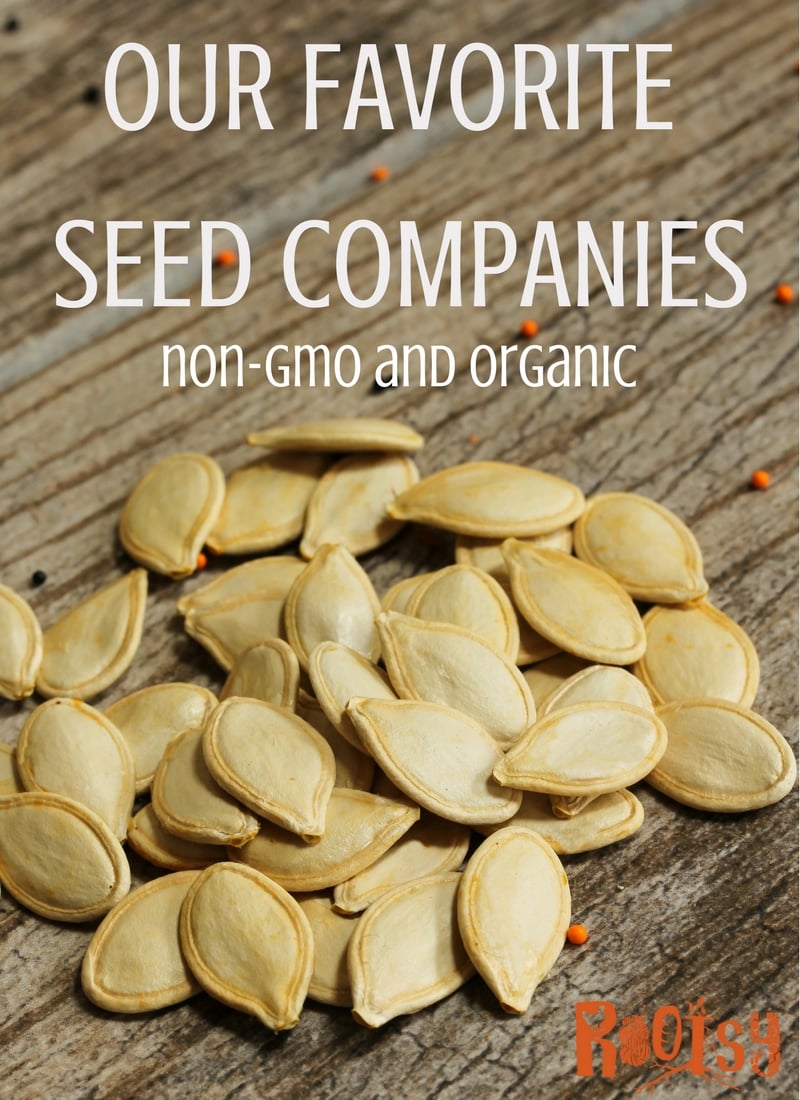 Very few companies sell GMO seeds and AFAIK you have to sign a contract to purchase them. Genetic engineering is expensive and time consuming. The companies that sell them tend to protect their product.

In addition to most of the above mentioned places, I like Sow True Seed and Southern Exposure Seed Exchange.

Yes, we love them! This article came out before we learned about them. I need to update it with their info.

Here in Washington State we have a organic & non gmo company that specialises in potatoes & garlic. www.irisheyes.com . Also check out the westCostSeedCo.com .

Thanks for the recommendations! Yes, we need diversity in our seed companies, just like we do in our gardens.

What about seedsnow.com? Non GMO, organic, heirloom and sample sizes for $1.00. It is speedy.

Thanks for the suggestions, Edna.

Annie’s Heirloom Seeds is local for me in Michigan & I have always had great success with their seed stock - been using them for 5 years now! With Baker Creek, I have found several seeds that are advertised as heirloom, but have been around less than 25 years, and that is not an heirloom, in my humble opinion.

Thanks for the suggestion!